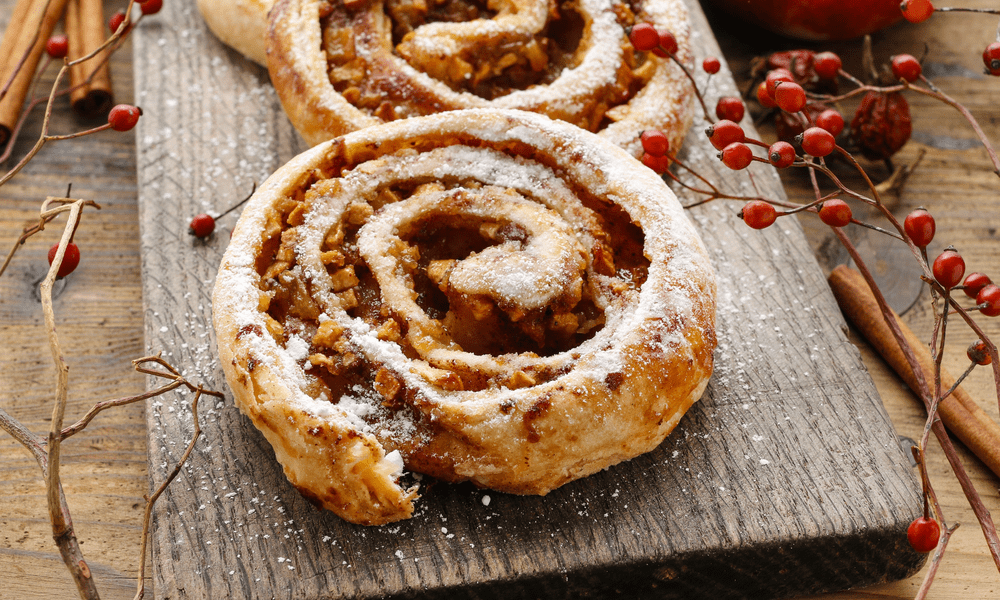 Fall means it’s time for apples and all the delicious baking associated with them. Apple pies, apple butter, apple crisp – we really can’t get enough. And since apples naturally pair beautifully with cinnamon, apples + cinnamon rolls are a natural fit.

It’s hard to mention apples without talking about their health benefits.

We feel a little bit justified indulging in apple baked goods because apples are so healthy! Aside from the high vitamin C and fibre content that this fruit is known for, did you know that apple also helps regulate blood-sugar levels with its antioxidants and fibre by slowing down digestion? A study conducted on over 38 000 women also showed that the consumption of one or more apples per day lowers the risk of developing Type 2 diabetes by 28%.

Antioxidants come with tremendous benefits, and those found in apples are no exception. A study, “Does an apple a day keep the oncologist away?” reported that the consumption of at least one apple a day lowers the risk of colorectal cancer by 20%, and breast cancer by 18%.

Even if all that doesn’t convince you to jump on the apple bandwagon, the deliciousness of apple cinnamon rolls should win you over.

When life gives you apples, pair them with cinnamon. You already know we love anything cinnamon swirly–in case you missed our cinnamon swirl pie crust–so here’s a scrumptious apple cinnamon roll recipe for you to try.

Get The Full Recipe


Imagine snuggling by the fireplace to this warm dish of apple cinnamon roll on a cold, stormy day. Nothing screams cosy and comfort more than that combination. Share with us your favourite apple recipes!

The Secret To Making Amazing Broccoli

This is an ode to broccoli, which has played the villain role for far too…

All The Ways You Can Use Chard

You would never guess it based on appearance, but chard is actually a relative of…

10 Delicious Fruits That Were Made To Be Grilled

Grilling season is upon us, and before you reach for all the sausages, patties, and…