If anything, sunchokes are more similar to potatoes, mostly in the sense that they’re root tubers with a similar flavour profile. They’re nutty and savoury with a slight artichoke-y taste – like a potato/artichoke cross – and are best used as other tubers are: mashed, in soups, pureed, or roasted.

Why you should eat sunchokes:

While inulin sensitivity varies from person to person, it’s best to avoid eating sunchokes raw altogether. To test whether you are sensitive to sunchokes, try eating a small amount, and slowly introduce it into your diet. Here are 2 tasty cooked sunchoke recipes that are sure to boost your gut health and keep you regular, but hopefully without any fartichoke side effects.

Note: anyone that suffers from IBS or other gut issues should be wary of sunchokes, as they can be harsh on the digestive system.

Roasted Sunchokes With Garlic and Thyme

A healthier alternative to potato chips (although nothing can replace Hardbite), sunchoke chips offer a fresh taste and flavour to classically fried chips.

What are your favourite sunchoke recipes? We’d love to hear ‘em! 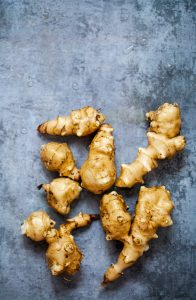