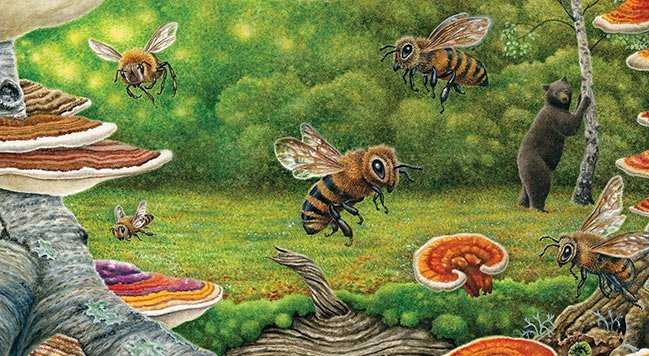 “Our research goal is to help solve Colony Collapse Disorder. And the results look promising.”

Although CCD is not fully understood, it appears to be a destructive synergism of multiple factors. Pathogen (bacterial and viral) infections harm bees already challenged by other stress factors, including parasitic mites, pesticides, fungicides and GMO exposure. These stressors of infection, parasitism, toxins, and immune deficits/depression may initiate CCD.

Helping to save the honeybee with mushrooms

Host Defense extracts, especially Reishi and Chaga, showed substantial benefit to honeybees, including extended longevity and reduction of their viral burden by more than 75%.

“Our research goal is to help solve Colony Collapse Disorder. And the results look promising, with regard to the Host Defense Chaga and Reishi extracts,” Sheppard says. “As an entomologist with 39 years of experience studying bees, I am unaware of any reports of materials that extend the life of worker bees more than this.”

Dozens more experiments are underway including research on whether certain species of mycopesticide fungi can eliminate the parasitic Varroa destructor mites that decimate beehives around the world.